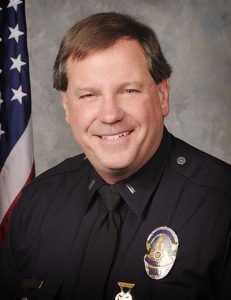 Lieutenant Lally was born in Cleveland, Ohio and joined the Los Angeles Police Department on March 31, 1981. He worked various patrol assignments for over 25 years as a Police Officer (in the elite Metropolitan Division), Sergeant and Lieutenant. He has received approximately 200 commendations throughout his career, both from the Department and the community.

Lally was elected as a Director to the Los Angeles Police Protective League on January 1, 2012 and elected President on January 1, 2015. He currently serves on the Board of Directors of the Valley Industry and Commerce Association, the Executive Board of the California Coalition of Law Enforcement Association , and the Board of Directors of the California Police Officers Memorial Foundation. 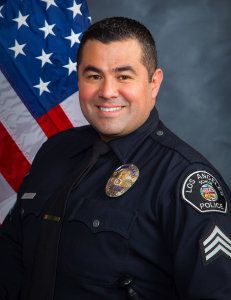 Sergeant Rudy Perez is a 19-year veteran of the Los Angeles School Police Department. Sergeant Perez holds a Bachelor’s Degree in Criminal Justice Management and has completed dozens of specialized and advanced officer training courses including Patrol Combat Tactics, Social Networks Investigations, Threat Assessment, a Gang Investigation Course, and Tactical Communications. He has worked a variety of assignments including policing high school and middle school campuses, day and night patrol, interagency task forces, gang detail unit, bike patrol, training unit and as a detective in the investigative division (Threat Assessment Unit). Rudy is currently working as Sergeant Adjutant to the Office of the Chief of Police.

Sergeant Perez served as President and Vice President of the Los Angeles School Police Officers Association, which represents 500 police officers in a school system that has the responsibility to protect 700,000 students and 69,000 employees in 23 cities. He served with the LASPOA for 14 years and has instructed labor managers nationally in the areas of labor relations, POA social media marketing, political action committees, employee rights, anti-police social groups, and critical incident response for POA’s. In addition, he sits on several national boards and organizations having to do with law enforcement. These include the National Association of School Resource Officers (NASRO Vice President), which represents 11,000 School Resource Officers across the nation. Rudy also served at the National Association of School Security Law Enforcement Officials (NASSLEO), Fraternal Order of Police (FOP), and the Peace Officers Research Association of California (served as At Large Director in PORAC, which represents 90,000 police officers in the state of California). 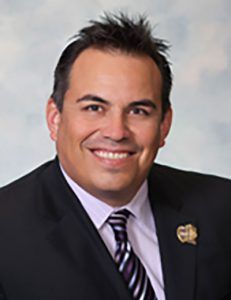 Jack Schaeffer joined the San Diego Police Department in 1989. He has worked as a patrol officer at Eastern Division and Mid-City Division. He worked on Northern Division Juvenile Services Team and the Summer Beach Team. Jack’s investigative assignments have included Northern Division, Vice Operations, and the Street Gangs Unit. Jack was also a member of the Emergency Negotiations Team.

Jack was first elected to the Board of Directors in 2013. He has been active on the Labor Management Committee (LMC), the Political Action Committee (PAC), Budget and Finance Committee, Business and Governance Committee, and Fundraising Committee. He Chaired LMC and Co-Chaired PAC prior to being elected President.

Jack believes that in his role as President, his primary responsibility to our members is to continue leading in the right direction while also raising the bar. 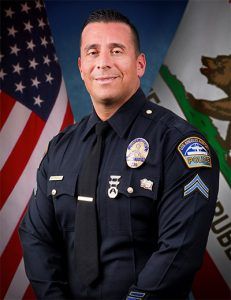 Rodolfo Bojorquez is a 15 year veteran of the Los Angeles Airport Police Department. Rodolfo has worked a variety of assignments including Patrol Services, Defensive Tactics and his current assignment with the Emergency Services Unit SWAT team where he serves as a Rifle, Taser, and Active Shooter instructor. Rodolfo completed his Bachelor’s Degree in Kinesiology, Physical Education in 2001 and has also worked for the the United States Customs Service where his passion for law enforcement was born.

Rodolfo is the current Vice President of the Los Angeles Airport Peace Officers Association (LAAPOA), which represents 500 officers at Los Angeles International Airport (LAX), the largest final destination airport, in the United States. LAX has welcomed over 85 million passengers annually and is known as one of the nation’s top terrorist target’s. He has served on the LAAPOA board for 4 years and welcomes the opportunity to serve the CCLEA membership.